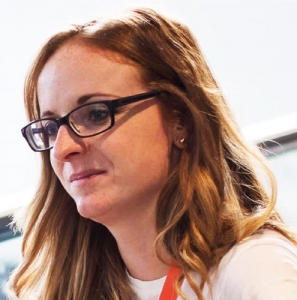 Klara is a Functional Learning Specialist for the Tech Recruiting organization at Facebook Seattle, US.

Originally from Hungary, Eastern Europe. She claims to be a true Sourcer at heart: always and forever. She started her career in recruiting back in Hungary at small agencies (like everyone else) when she met Balazs (yes, TheBalazs) at a guess what…recruiting conference where he told her that he wants to hire her once… Couple coffees and interviews later she joined Randstad Sourceright in Budapest (back in 2014 it was the sourcing hub of Europe) and as employee number 3 she started working on all the fun projects (eg: looking for Marine Engine Designers to Lead Offshore Engineers to Yacht Designers, etc.). She attended the very first SOSU events and absolutely fall in love with the knowledge-sharing, the community vibe, the energy, the element of networking, the after-hour beers & dancing and the people themselves ❤️ Extra credit if you can find a GIF of her being SOSUEU’s DJ once in Amsterdam… She was lucky enough to be able to move to Dublin, Ireland and work at Social Talent with Johnny Campbell. You can say, she learnt from the best of the best in the industry. In 2017 she joined Facebook in Dublin and planned out EMEA’s very first Sourcer Development Program where they hired people with little or no experience and trained them to be rockstar Sourcers.

2 years ago she moved to Seattle as a Learning Partner for Facebook’s tech recruiting org, supporting more than 1K people as an Advisor and Consultant for their training and learning needs. Feel free to get in touch with her on LinkedIn.

SPEAKER TOPIC/SUBJECT TO BE ANNOUNCED

Bear with us. The amazing talk topic by this amazing speaker will be announced soon. Meanwhile, follow us on @SourcingSummit